Diamond Hill is located in Kowloon. This site did not have any diamond mines. In Cantonese, the Hill is pronounced as “Jyun Sehk Saan”, in which “Jyun Sehk” means “Rock digging” but could also mean “Diamond”. Thus, the hill got the embellished English Name of “Diamond Hill”. The quarry was located at what is now the Fung Tak Estate. The history of the quarry can be traced back to the 18th Century, when Chu Yan Fung came to the region and established the Tai Hom Village near Diamond Hill. He is the youngest son among the eight sons of Chu Gui Yuen, a former mason in Shek Tong Tsui on Hong Kong Island. Chu’s family migrated to Kowloon because of an infestation of tigers, wolves and pirates in Shek Tong Tsui. Three of the sons later migrated to d’Aguilar Peninsula, while Chu Yan Fung settled near Diamond Hill.

Twenty-two stone houses constructed with local granite from Diamond Hill were built at the western part of Tai Hom Village in 1947. They were named as “Daguan Gardens”. Many Asian film stars resided in “Daguan Gardens” as the site was near studios such as “Daguan Film Studio” (later re-named as “Diamond Hill Studio”) and “Yung Hwa Studios” (later taken over by Cathay International (HK) followed by Golden Harvest Productions). Only stone house No. 4 exists today. It is now listed as a Grade III historical building in Hong Kong. 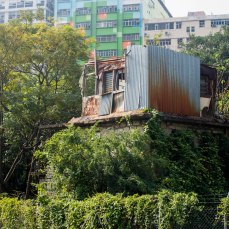 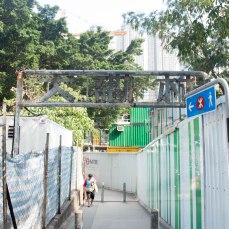 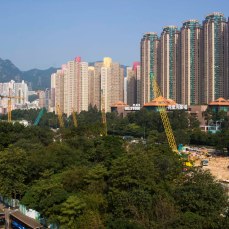